I don’t know about you, but all this computer calamity has left me wondering why it isn’t more commonplace. I mean, sure, the likelihood of awakening demons by way of technological means is low, and yet the destruction on display is more compelling than the world’s most reliable Internet connection. You have a scene wherein the school secretary’s shower is interrupted by demonically spawned boars, which is just but one depiction of organ removal. I guess she won’t have to worry about giving SlimFast a chance, nor will she be washing behind her ears. Ha ha. Evilspeak has put me in a good mood, what with its unrestrained depictions of vengeance, which, by the way, is why I am choosing Iced Earth’s Vengeance Is Mine as the song of the day. It came to mind during the finale, so there ya go.

I’m not much of a cellar dweller, but I must say that Stanley is right at home among the candlelit backdrop. It’s pretty cozy, you know? And there’s even a black magic book that has been collecting dust for quite some time. Thankfully, our young cadet finds it to be a real page-turner, in spite of the fact that he doesn’t speak Latin. That must be what they mean by dead language, in which case I’m not surprised that West Andover Military Academy doesn’t have a language department. Not that that would’ve made much of a difference, but the point is that Stanley doesn’t mess around when it comes to translating the book into English. All he does is punch in a few keys and voila! If that isn’t brain power in action, I don’t know what is.

The bullies are nothing more than stock characters, although it is satisfying to see them get their comeuppance. So satisfying, in fact, that you’d be hard-pressed not to enjoy a finale in which flames, sword play, and even a ripped-out heart constitute the chaos. It is sheer insanity as Stanley’s tormentors endure hell on earth. But don’t take my word my for it — you really ougtha experience it for yourself to get the full effect.

I have known about this one for a while and I must say that I found it pretty wild. I mean, Clint Howard is having a field day which is topped off nicely by a haunting score and a ritual that would put the most seasoned of Satanists to shame. What more could you ask for? 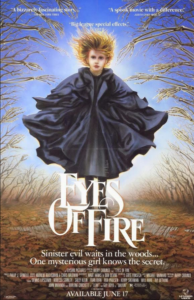