I guess the first shark is too busy pursuing his prey to comment on this movie, so the world may never know if he’s related to the titular shark. Wouldn’t it be something if he was? If so, I can only imagine how proud he is of his offspring, which may sound silly to think about, but who cares? It’s on my mind after viewing this beachside snack of a movie, so you might as well savor the thought. After all, you wouldn’t want sand in your ice cream cone, would you? If it does get ruined, toss it in the water because this shark is one hungry son of a gun. I’m sure he wouldn’t mind a little extra to go with his tidbits of flesh and blood.

For the most part, the characters are as shallow as a kiddie pool, but at least Peter and Ron know what they’re doing when it comes to putting an end to the saltwater massacre. Are they going to have a ship named after them? Probably not. Nonetheless, I think they deserve medals for their efforts, even if the most prestigious fisherman would question their methods. If he did, he might find himself with his legs bitten off faster than you can say exploding shark. Wouldn’t that be a seaworthy way to go out?

Although the shark attack scenes are nothing short of ridiculous, they manage to entertain. The bit where the shark lunges at a helicopter comes to mind, especially since it makes very little sense. At least the pilot is putting his license to good use, right? Little did he know he would contribute to the appeal of the over-the-top temperament. It lacks suspense, but I can assure you that you’ll get a few good laughs out of the aquatic antics. Just remember to have some dynamite handy and you’ll be fine. 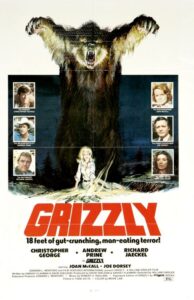