To resurrect the dead, or not to resurrect the dead, that is the question: whether ’tis better to leave well enough alone. Shakespearean, innit? Although I can’t say for certain what the Bard would make of Children Shouldn’t Play with Dead Things, I’m sure he would find the dialogue amusing, what with its penchant for insults and sardonicism. It’s a testament to the fact that most of the film is spent with the characters, all of whom are in a milieu which is distinguished by its features, namely fog, gravestones, and grime. These serve as a visual representation of the erosion of the relationship between Alan and his actors, which is fitting as there a high degree of unpredictability to the ritual. Without a doubt, it is a moment that stands out due to its palpable sense of dread.

There are moments in which sound is used to great effect. In fact, the sequence in which Alan and his troupe make their way through the graveyard is permeated by dissonant sounds of animals. Not only is it otherworldly, but it is accentuated by an ominous-sounding piece which plays as the dead observe their guests from the shadows. While such moments are brief, they aren’t without conveying that the dead don’t take kindly to being disturbed.

Though the film takes it time, the finale is worth the wait as the dead arise in droves and keep their guests on their toes. As you might imagine, it is a harrowing state of affairs that never loses steam. Everything from Alan’s attempt at reversing the ritual to the high degree of danger is in the limelight, so chances are you’ll find yourself in the midst of the chaos. Talk about the cherry on top! Plus, the distorted howling sound is as unexpected as it is menacing, so it should satisfy you if you’re hoping to be caught off guard.

I’ve been sitting on this one for a while, but I’m glad I gave it the time of day. I don’t know where I would rank it alongside the heavy hitters of ’72, although I will say that it is a gem. I think the relationship between Alan and Orville is strange but also fascinating because there are implications of its reciprocity. It’s one of the few aspects that is worth paying attention to, especially since you don’t often see a protagonist interact with a corpse. It may not be the most conventional of relationships, but then again, it has its fair share of entertaining moments. If you can’t get behind those, then maybe you are due for a visit to an uninhabited island, if only for the sake of unearthing a few corpses while having a good laugh. 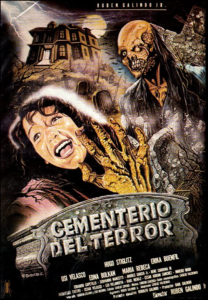